While we hear very often that most of the famous Bollywood Movies are inspired from Hollywood.  Koi Mil Gaya(ET), Chachi 420(Mrs Doubtfire),  Sarkar(The Godfather) for instance and among the latest one in the list is Salman Khan’s Tubelight which  took too much of inspiration from Hollywood’s (Littleboy), and upcoming Tiger Shroff’s Rambo is inspired from, ….we all know from where 🙂

toward not exactly Bollywood but definitely towards ancient India’s scriptures. Matrix trilogy for example has been influenced by the holy Geeta. Matrix means Maya or the illusion world. The relationship between Morephus and Neo can be compared to that of Krishna and Arjuna.

And now Avengers franchise seems to be turning pages of  Veda’s (Ancient Indian Scriptures), so all Avengers unite in infinity war movie to battle their biggest and strongest enemy Thanos, who is on a mission to collect six infinity stones, and each stone holds a particular power. The one who shall  holds all six stones shall gains omnipotence and omniscience. Thanos intends on acquiring all six stones in order to assemble his Infinity Gauntlet, which will provide him with the ability to control all reality and finally enact his plan to wipe out half the galaxy.

The word Chakra in Sanskrit means wheel or disk. Chakras are the major energy centres in our body, known to emerge within the Vedas precisely Rigveda which are believed to be a part of our subtle body. The belief in Chakras started in India and is made use of in the Ayurvedic medicine, and is part of  the core texts of hatha yoga. 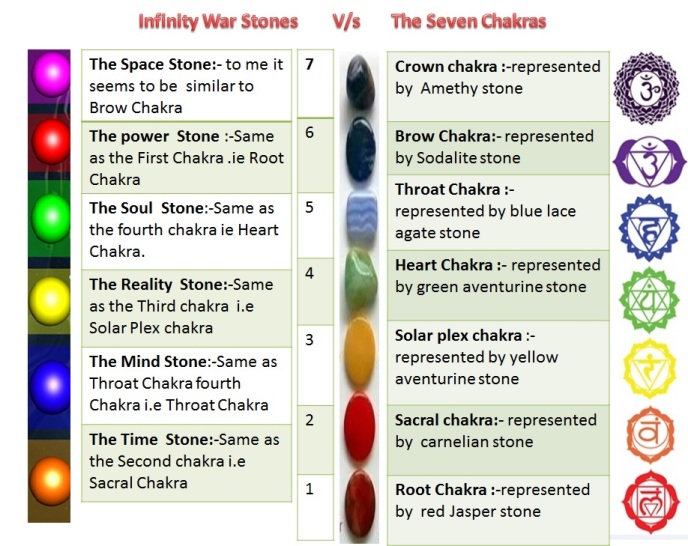 So now the obvious question coming to your mind must be that why i am even comparing  Six (Stones) with Seven (Chakras), The same question popped up in my mind as well,  as i could only see six stones in the movie not seven, however i had a strong feeling that these stone must definitely be aligned with seven chakra’s, so i searched the internet and guess what?  Yes my Intuition was right, there is a seventh stone as well and its called Ego Stone. I would compare that with last chakra i.e crown chakra.

And hey that a good News for all Avengers fans, for all of those who are disappointed  with this movie needs to know what this Seventh stone is all about, The seventh stone or Ego stone is a very powerful stone, and it has power to revive all the superhero’s back to life.

So Picture abhi baaki hai dost, wait for the next part. Till that time take a deep breath  and “breath in and breath out ” and concentrate on balancing  out all your chakra’s. 🙂

“If we can’t protect the earth, You can be dam’n sure we will avenge it”  – Tony Stark.

2 thoughts on “Uncanny resemblance between Infinity Stones and the ancient Indian body Chakra’s .”